Do you find yourself being confused by the term “Blockchain”? You’ve definitely heard of it as a buzzword, but what exactly does it mean? 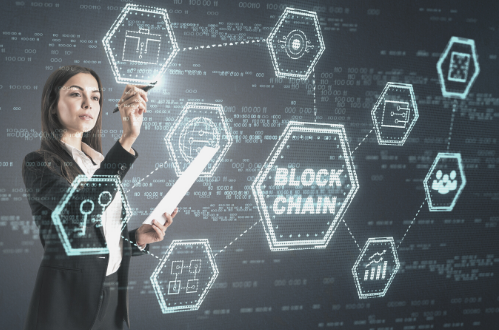 Let’s break the term down so it’s easier to conceptualize. Blockchain is essentially what its name alludes to: blocks with information storage capacities that when filled create a chain connected to the previous block. The “block-chain” acts as a database across a vast network of computers.

To begin the process, a trade listing the details of a transaction occurs, for example two coins traded for $100. Next, the record is checked by the computer network called “Nodes.” Once the record is accepted, it is added to a block containing a unique ID that cannot be replicated called a Hash. A “Hash” is created by a math function that turns digital information into a string of numbers and letters. Finally, the block is added to the chain, matching the Hash of the previous block to the current one.

The system of the blockchain is completely decentralized as there is no intermediary that regulates the happenings of the system; with public blockchains, anyone can participate in the “regulation” of the chain. Because of the unique nature of each Hash that is created with each block of data, the blocks cannot be tampered with. If a security breach occurs, the entire system will be able to pinpoint the corruption through cross-referencing the blocks across the decentralized network and the hacker’s version of the chain will be cast away as illegitimate (since the hacker’s version doesn’t match the version on the network). It is built this way so that taking part in the network is far more economically incentivized than attacking it.

The most well-known use of Blockchain technology today is Bitcoin, a digital currency invented by Satoshi Nakamoto. The cash system is fully peer-to-peer meaning that there is no third-party

intermediary involved. Each transaction is recorded on the blockchain ledger, creating a safe, tamper proof system for token transactions. Blockchain, however, is not just tokens, but can in fact be used to verify provenance (through the use of non-fungible tokens, or simply NFTs), regulate supply chain, transfer titles, retail loyalty programs and much more